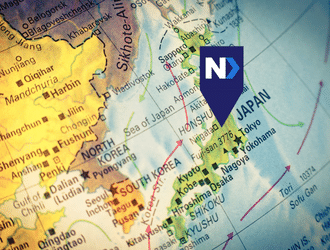 Greetings from Japan! My name is Peter Melendez, and I have been an automation engineer with NeoMatrix for 4 years. As part of a unique opportunity, I have traveled across the globe to a customer site in Japan. Our customer is one of many to whom we have delivered Ignition-integrated equipment over the past years. They have requested an engineer to help support their Ignition operations and train their engineers to use and troubleshoot Ignition. I was excited to be chosen to deliver their Ignition training and quickly started researching traveling and living in Japan.

My work assignment in Japan is for a 6-month duration, so I applied for a working visa, an international driver’s license, and renewed my passport. This was my first trip abroad since Covid and quarantine information kept changing making entry requirements a little confusing. Luckily, things were loosening on that front, not tightening, so that put me at ease. On the eve of my departure, I doubled and tripled checked my bags to make sure I had everything I could need. Since I’m over 6’, and would be considered mahoosive by Japanese standards, there would be no way I could buy clothes off the rack in my size.

The flight out of Boston Logan International Airport left mid-afternoon, and after 14 hours, landed at Narita International. It took several hours after touchdown to go through the long queues and wait for my rapid covid test to come in. Finally, I made it out of the airport and spent the night at a hotel in Tokyo to rest before the next leg of my journey. The next morning, I embarked on the 2-hour long high-speed bullet train ride to a rural, Japanese city. Finally, I had arrived at my destination and home for the next 6 months.

I have been in Japan for a little over 3 months now, but it has taken some time to get settled here, particularly since I can’t really speak Japanese well. Even though I started studying Japanese at home it turns out that studying a new language takes a long time to pay off. I’ve had a few small translation mishaps in convenience stores and home stores, but thankfully nothing that has led to complete embarrassment. It has been to my benefit that the Japanese way is often to communicate with no words at all – just gestures and objects. Fortunately, for important things like signing my apartment lease, agreeing to a phone contract, and renting a very rectangular car, I have had a translator.

Renting and driving a car in Japan has been quite an adventure. First off, there aren’t a lot of cars to choose from in Japan that will accommodate a 6’6” man. Picture the BFG (Big Friendly Giant) living in Japan, that’s me. Luckily, I found a Nissan Cube here, which is a very rectangular car that gives me just enough headroom. Secondly, they drive on the left here and that has been an adjustment. There’s only been one incident where I actually pulled over to the right side and was fully stopped at a light. Though driving on the left is becoming more autonomous now, I find I do still correct myself pulling into the right-hand lane – on occasion.

The one thing I can say is that the Japanese have done better than the States are the ubiquitous convenience stores like 7-11 and FamilyMart. More accurately, the convenience stores are basically the same, but the Japanese take pre-prepared foods much, much more seriously than America. There’s a huge variety of noodles, salads, rice balls, and other foods, all pre-seasoned and pre-dressed, even with recommended times to microwave them based on your microwave’s power. This is good because when I arrived in my apartment, I was surprised by how limited the kitchen was. I had expected doorways low enough to clip me on the head, a small bed, and a pretty narrow living space, but the kitchen! The kitchen is far too small. Two induction burners next to a sink are all I get, not even counter space for a cutting board. It’s been quite a challenge putting anything together that’s not a premade meal from the 7-11 or the supermarket.

If you come to Japan and plan on shopping, I definitely recommend getting some cash! Lots of people use electronic payment services (of which there are many…), but cash is still accepted nearly everywhere, and credit cards are not. Oh, and bring your own deodorant and aftershave (if you use it) it is harder to find here than at home.

As part of my training plan, I am writing lessons, translating them to Japanese, and presenting them to the engineers here. I have support from English-speaking engineers on-site in both translation and coordination. In addition to being a teacher of Ignition, I have also been helping with various work on site, including troubleshooting Ignition systems and providing updates when requested by the customer. Integration of new PLCs, such as Keyence PLCs through KepServerEX, is another one of the ways I’m helping around the site. I’m fortunate to be able to work alongside such a wonderful and welcoming team.

In my downtime, my hosts have taken me to see the sights in and around Japan! I have visited Tsuruga Castle in Aizu and walked the grounds and museum of Uesugi Castle in Yonezawa. Tsuruga Castle was one of the last strongholds of samurai loyal to the shogunate. Tsuruga Park is surrounded by cherry trees, which aren’t in bloom this time of year, but it is still a beautiful sight to see. The Uesugi Castle no longer stands, but there is the Uesugi Jinja Shrine dedicated to the family who once ruled the area. The shrine is accessible by bridges going over a koi-pond moat that at one time surrounded the castle. Beyond that, I have had the privilege of sharing with the team here many sushi, katsudon, and ramen meals. In the end, it’s not so hard to live here because even without words we can understand what the other human mind is looking for. At least I hope I have understood.